At this point I imagine the Kipchaks as practitioners of what modern times might call shamanism and likely also Tengrism, to be engaged in forms of mysticism that would include divination and forms of ‘vision questing’. I also imagine that they are in possession of playing cards, the yezi ge perhaps specifically, or other types of cards that may have circulated at this time along the Eurasian Steppe [10].

The Kipchaks do not have a land of origin, their language is considered Turkic, but there are many languages that fall under that title [11]. The Kipchaks and their history does not form anything close to a straight line. They were nomadic conquerors who conquered through assimilation to the sedentary cultures they conquered [12] [13]. In this way, I am imagining here, the Kipchaks acquired a great deal of language, religious practice, and cultural ephemera, to say nothing of a variety of racial and national identities. Eventually, the Kipchaks, at least some of them, join with another nomadic confederation known as the Cumans [10]. 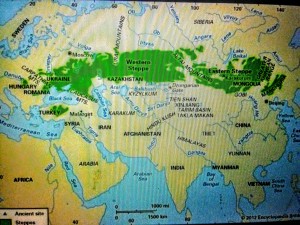 Modern ideas of lineage break like pie crust with just this simple look at history along the Eurasian Steppe. Nationalism, race, and religion become muffled by the sheer activity that happens in these ancient civilizations. Technologies in language, mysticism, tools, animal husbandry, and general processes are trading and integrating from both the eastern and the western seaboards– from the Black Sea to the Yellow Sea [14].

At this point in my imagining, the physical playing card is placed into the hands of the Kipchaks in Manchuria, just outside of Beijing, and/or the machine technology to create them is passed along, sometime between 900 B.C.E and 1200 B.C.E.

In the early 12th century the Mongols begin taking power along the Euraisian Steppe [15], eventually the Mongols become one of history’s most brutal conquering powers, but for my purpose here I am mostly interested in how their growing power might have affected the Kipchaks and their enslavement as Mamluks or warrior slaves.

The Mongols combined forces with the Kipchaks to defeat the Alans, then the Kipchaks attempted to overthrow the Mongols, but the Kipchaks lost the overthrow and, it would seem, their identity. Some Kipchaks flee to Russia, Hungary, and Iraq, while others among the Kipchaks become mercenaries in Europe. It is that later group of Kipchaks, the mercenaries, that are eventually captured as slave warriors and brought to Egypt among other nations [16] [17].

The ‘slave warrior’ is known as Mamluk [18] and were taken from a variety of cultures and were considered to hold a higher status than other enslaved persons. Several Mamluk Dynasties appear in history. The Kipchaks and other nomadic confederations were skilled at assimilating to sedentary cultures and then overthrowing those cultures. I imagine here that enslaving nomadic tribes or confederacies with this deep knowledge of politics and warcraft would risk that they would eventually come to power. The fact that these dynasties are referred to as Mamluk Dynasties might be a way of pointing out a certain truth in this regard.

The Mamluks are descended from a variety of ethnic, political, and religious backgrounds. While they are generally– from what I can tell– working/warring in service to the spread of Christiandom, they are not necessarily Christians themselves or not originally Christian and the Kipchaks, at least, are mimics of dominant cultures as a means to infiltrate and come to dominate those cultures.

Our next stop will be a brief look at mysticism in Islam, Christianity, and Judaism as all of these religions play a role in Egyptian culture during the Mamluk Empire and form the roots of modern mysticism. After that we will move on to the Mamluk overthrow of Egypt and the development of the playing cards that contain numbers.